Last Friday night before the Riley versus Adams basketball game, seniors Reontre Lawrence of Riley and Brandon Wadley of Adams, honored their most influential educator; Mr. Stammich.  Mr. Stammich is a counselor at Jefferson Intermediate Center and the football coach.  He has worked for SBCSC for 20 years.

Reontre chose Coach Stammich because he has helped him make so many positive decisions in life. Playing football for Coach Stammich made him think about more than just sports. Coach has made him feel like sports wasn’t the only good thing about him. Coach also helped with anything that I needed help with. He inspired me to use sports as a ticket to get far away. Out of all of my school years, Coach Stammich has had the most impact on my life. He is a father figure to me.

Brandon Wadley choose Mr. Stammich because he had an amazing impact on his life, education, and football career. He was always on us about our grades and becoming better men in this society. He is also the reason I feel in love with the game of football. Mr. Stammich would also preach to us how important college was and that it should be one of our top goals in life. I just want to take the time to thank him for all of his help and support and that he is a truly like a father to me. Thank you,Mr. Stammich for everything.

Thank you Mr. Stammich for being a positive role model to students in South Bend Community Schools. 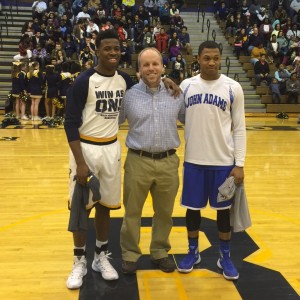