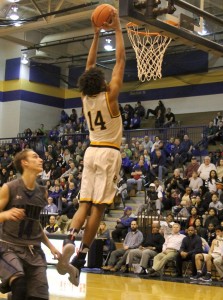 SOUTH BEND – (11-0) 5-0 NIC South Bend Riley played host to the (5-6) 4-2 Marian Knights on Friday at Algie Oldham Gymnasium. It was the first game Riley Head Coach Mark Johnson coached on his birthday since 2012. In that contest against crosstown rival Adams, Riley was defeated 82-56. Coach J and the many Riley faithful in attendance hoped this game would provide a much different result.

Fast starts have not been commonplace for the unbeaten Wildcats this season, but this was not the case on Friday. Twenty-four first quarter points equated to a 10 point lead after 8 minutes. The second quarter was not the brightest for the Wildcats as they were outscored by 5, and a once 13 point lead was just five heading into the locker room.

The game remained close through the third quarter, but Riley would pull away midway through the fourth en route to their 11th straight victory. Riley over Marian 80-69.

Damezi Anderson led the team in scoring for the 9th time in 11 contests with 32 points on 12/24 shooting and 7/12 beyond the arc. Junior Forward Shamar Dillard and Senior Center Roland Austin each tallied 15 in the victory.

The 11-0 start for the Wildcats is the best in 44 years. 11-0 is over halfway to a potential undefeated season, but of course, “it’s not how you start, but how ya finish!”

Riley hosts 6-6 Elkhart Memorial on Tuesday in search for their 12th straight win.

Sectionals
9:00 am
View All Events