Ricky Davila is proud to announce that he will continue his academic and athletic football career at Trine University.  Davila is a 3 year letter winner in both football and baseball at Riley.  He currently holds the record for the most  touchdown passes in a season(14).  He was 97-165 completions/attempts 1093 yards with 14 touchdowns this past year and in his career- 2238 yards and 22 touchdowns.  He was also named to the 2nd team All-Conference as a DH in baseball.  Congratulations to Ricky Davila!!! 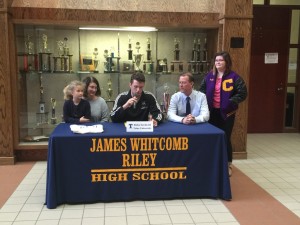